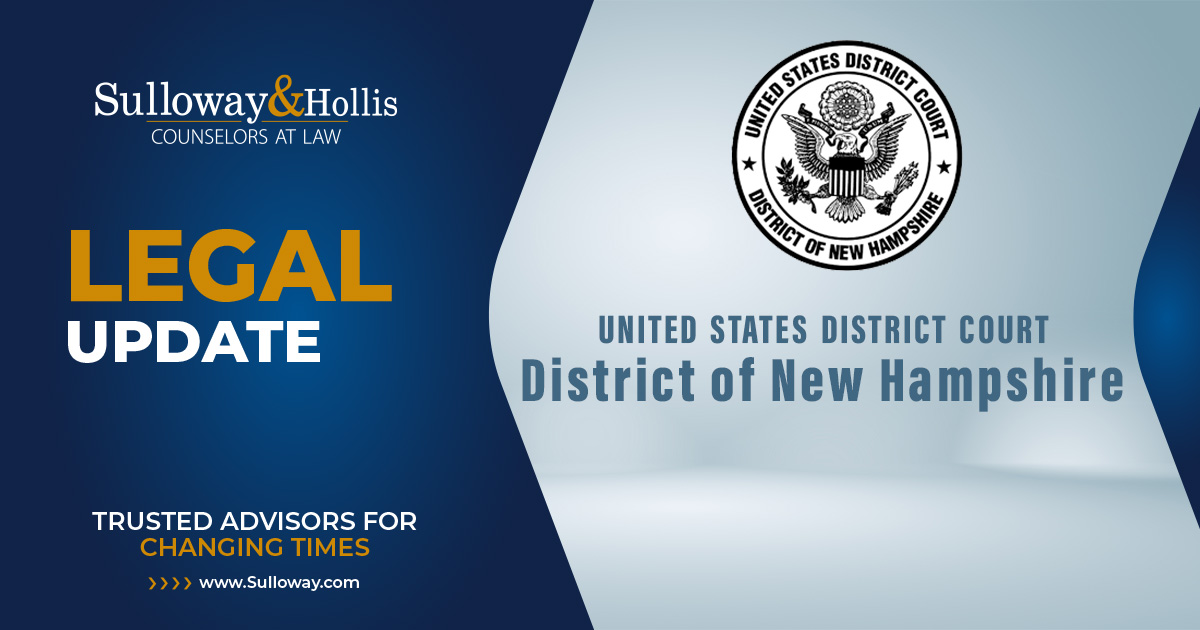 This past summer, on July 5th, the District of New Hampshire issued a further clarification on available coverage for property damage stemming from faulty workmanship, including a review of whether stipulated construction delay damages could trigger coverage. Hutton Construction, Inc. v. Continental Western Ins. Co., 2022 DNH 076 (Barbadoro, J.) (Order on Motion for Partial Summary Judgment). Insurers for New Hampshire businesses now have additional guidance on how New Hampshire courts will interpret what constitutes a covered “occurrence” in such circumstances.

The key element to the potential coverage for resulting or related “property damage” is the fortuitous intervening event. While the court clarified there is no New Hampshire authority to suggest that faulty workmanship will always constitute an occurrence if it results in damage to non-defective property, an intervening event or exposure that occurs fortuitously, causing harm to non-defective property, may trigger coverage because it can constitute an accident.

An Expected Consequence of Defective Work, Such as a Stop-Work Order, Does Not Constitute a Fortuitous Event

While the Court did not provide a specific definition of “fortuitous event,” as by its own name the event must be unexpected and incidental, it opined whether a stop-work order could itself qualify as such an event. It does not. Such an order, as Judge Barbadoro highlighted, is the expected consequence of defective work.2
Aligning with prior New Hampshire precedent (i.e., the High Country decision), Judge Barbadoro also confirmed that the natural water infiltration that caused damage to non-defective property while the stop-work order was in effect in this matter did satisfy the occurrence requirement.

In this action, the Court was also tasked with examining whether compensation for economic loss in the form of delay damages could constitute “property damage” under the applicable policy.

The operative policy language required payment for: “sums that the insured becomes legally obligated to pay as damages because of . . . ‘property damage.’” (emphasis added). “Property damage” is defined to mean “[p]hysical injury to tangible property, including all resulting loss of use of that property,” and “[l]oss of use of tangible property that is not physically injured.” The District of New Hampshire, following many courts in the U.S., determined that damages incurred “because of” property damage include consequential damages, and are not limited to only those damages that measure the injury to the property. In reaching this determination, the Court promptly rejected the insurer’s argument that stipulated delay damages are contractual in nature. Therefore, construction delay damages that directly result from covered property damage—i.e., where there been an intervening fortuitous event as discussed above—are consequential damages incurred because of property damage.

As such, the Court ordered the faulty subcontractor’s insurer to provide coverage for the stipulated damages for the two-month period during which repairs due to the fortuitous water infiltration occurred as “property damage” under the applicable policy. This action is now stayed by request of the parties, and the remaining issues in this litigation, including those not briefed for summary judgment, await consideration.

The Sulloway & Hollis Insurance and Reinsurance team provides strategic guidance and advocacy to insurers and third-party administrators across New England, in areas that include insurance coverage, extracontractual and bad faith liability, regulatory compliance and related matters. Our team counsels insurers and reinsurers on the most complex and emerging issues facing the insurance industry.